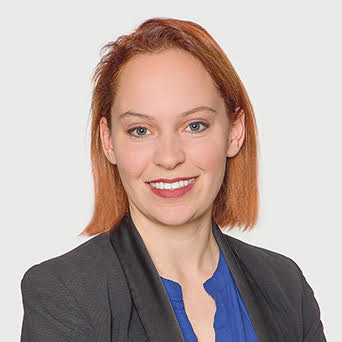 Emily has an eye for all things strategy, spending most of her time spinning data into stories.

Emily has an eye for all things strategy, spending most of her time spinning data into stories. 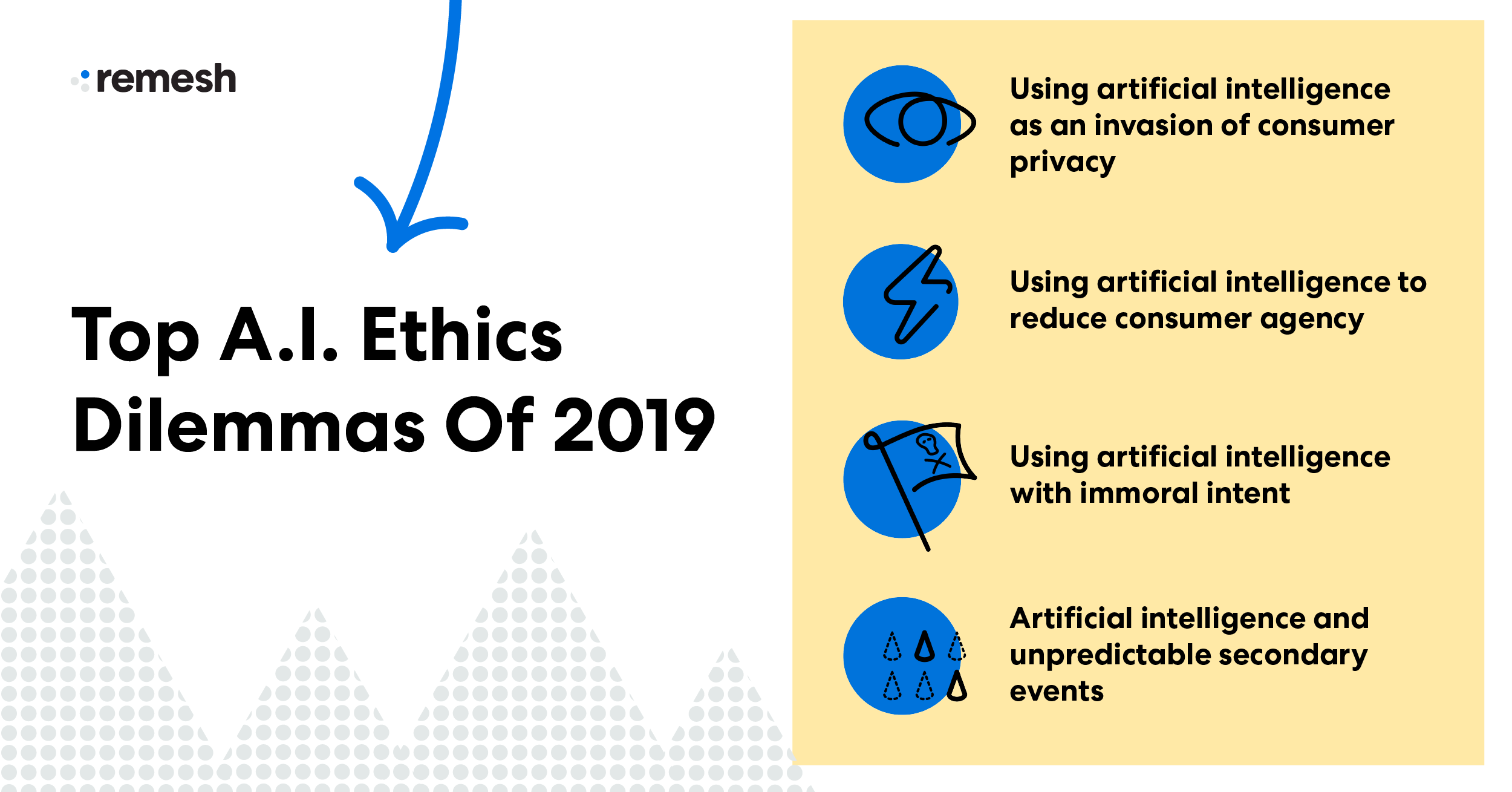 The time to talk about ethical issues in A.I. is now. While machine learning is not a new tech development, the ethical questions and dilemmas surrounding artificial intelligence are at their most historically pressing moment. There are multiple ethical questions to confront, including the comprehensive list of moral principles and issues below.

Within a population, the first concern that arises when technological advancement nears is job security. As with the original industrial revolution, what terrifies workers is the scalable automation of labor.

During the first industrial revolution, the U.S. government pushed college education for the first time in history. The issue for Americans then was not the cost of college, but the cost of pausing labor to earn a degree. It’s likely that this push for higher education was only successful because the automation of old jobs made “professional” labor (which often required a degree of higher education) an obvious alternative.

Two scenarios that exist in this particular A.I. ethics dilemma:

Whether we know it or not, people are increasingly interacting with machines to complete day-to-day tasks - this poses an issue of transparency, but also of behavioral influence. Google Duplex, for example, uses an A.I. system that sounds like a live person to make restaurant reservations over the phone. The system can respond to questions on the fly and is mostly indistinguishable from a real person.

While human attention and patience are limited, the emotional energy of a machine is not - rather, a machine’s experience of limitations is technical. Although this could benefit certain fields like customer service, this limitless capacity could create human addiction to robot affection - according to A.I. experts like Stephen Wolfram (whose inventions power a piece of iPhone’s Siri), this idea is not entirely unrealistic. That makes Her, a film about a man who falls in love with a machine, more plausible than ever before.

Other not imitating an actual person, many apps are built with the intention of using algorithms to nurture addictive user behavior. Tinder, for example, is designed to keep users on the A.I.-powered app by instigating less likely matches the longer a user engages in a session.

3. Training Biases in Hiring and Crime

One of the most pressing and widely-discussed A.I. ethics issues is the training of bias in systems that involve predictive analysis, like hiring or crime. Amazon most famously ran into a hiring bias issue after training an A.I.-powered algorithm to present strong candidates based on historical data. Because previous candidates were chosen through human bias (favoring male candidates), the algorithm favored men as well.

In March, the NYPD disclosed that it developed Patternizr, an algorithmic machine-learning software that sifts through police data to find patterns and connect similar crimes, and has used it since 2016. The software is not used for rape or homicide cases and excludes factors like gender and race when searching for patterns.

Although this is a step forward from previous algorithms that were trained (and still operate) on a racial bias to predict crime and parole violation, actively removing bias from historical data sets is not standard practice. That means this trained bias is at best an insult and inconvenience; at worst, a risk to personal freedom and a catalyst of systematic oppression.

A lesser-known A.I. ethics issue is the proliferation of deep fakes, a technique that uses A.I. to superimpose image, video, and audio onto others, creating a false impression of original media and audio, most often with malicious intent. Deep fakes can include face swaps, voice imitation, facial re-enactment, lip-syncing, and more. Unlike older photo and video editing techniques, deep fake technology will become progressively more accessible to people without great technical skills.

The technology first became accessible to the public, for example, with the launch of FakeApp, which easily allows users to swap faces with anyone - including celebrities and political figures.

According to experts like former Secretary General of NATO Nina Shick, the manipulation of images and videos through deep fakes could have catastrophic effects for global order - for example, a lip-synced video of Donald Trump announcing nuclear warfare - and as a result, the deepfake technology is largely censored by websites like Reddit.

Similar tech was used during the last U.S. presidential election when Russia implemented Reality Hacking (like the influence of fake news on our Facebook feeds). This information warfare is becoming commonplace and exists not only to alter facts but to powerfully change opinions and attitudes. This practice was also used during the Brexit campaign and is increasingly being used as an example of the rising political tensions and confusing global perspectives.

Using artificial intelligence as an invasion of consumer privacy

Although there are some government regulations put in place to ensure consumer privacy (like the GDPR, a European Union data privacy law), the potential for AI to understand buyers on an intimate level is enormous. Some potential examples of how AI could breach privacy include:

Similar to the risks of international misinformation (like fake news reports), the ethical risks of A.I. in this capacity are colossal. While replacing human soldiers with artificially intelligent robots, or creating autonomous weapons, would potentially reduce the risk of harm a defensive government power might cause, artificial intelligence poses an ethical dilemma comparable to the nuclear bomb.

Although international leaders rarely speak of the role of artificial intelligence in nuclear weapons testing, companies like Microsoft have quietly announced their willingness to sell advanced A.I. systems to the Pentagon. Both Moscow and Beijing have also suggested the use and testing of autonomous tanks that pose enormous risks to A.I. ethics guidelines.

7. Singularity, or the robot overlords

Like a nightmarish episode of The Jetsons, the idea of the robot overlord looms in consumer minds as the most obvious A.I. ethical dilemma. According to Nick Bostrom, a superintelligence expert at University of Oxford, it’s possible that the malicious robot overlords of our imaginations could be a reality if future A.I. systems hold values that don’t align with human values. Who are we as humans without autonomy? Who are robots when they’re given autonomy? And finally, how do we define each when given the same freedom and intelligence?

According to Ray Kurzweil, futurist and Chief Engineer at Google, singularity is closer than we think. Kurzweil predicts we will merge human intelligence with artificial intelligence by 2045, which he suggests will make us even more intelligent - something to look forward to, not fear.

If there is artificial intelligence, there is also artificial stupidity. Currently, A.I. systems are trained on patterns in certain examples, and because all possible examples can not be covered, the systems are easily confused when presented with a new scenario. This is because A.I. systems don’t yet have the ability to recognize likenesses as humans do, as in pattern recognition when A.I. systems are confronted with scenarios that differ from the examples used in training, and the systems cannot contextualize the situation.

If A.I. systems are easily fooled, that means they’re vulnerable to influence from nefarious parties, as in cases of adversarial attacks in machine learning. An algorithm, for example, might read fake news from an influential account and popularize it based on optimized content factors rather than fact-checking the news source or idea like a journalist might before publishing it.

At large, the tech industry is most controversial for lacking regulation - in part because the industry changes so rapidly that it’s difficult to understand where law enforcement should begin, and in part because the culture of tech runs on the same dreams of the Wild West. That is, on innovation at any cost.

There have been attempts at self-regulation - like at Google, which put together an ethics board internally only to dismantle it shortly after because of its controversial members, including those who deny climate change and hold anti-immigrant sentiments. Similarly, Microsoft has vocally encouraged Washington to regulate A.I. systems, especially facial recognition software; however, the company’s relationship with lawmakers has been pointed out as too tight knit by competitors.

Despite our best human efforts, it may be possible that A.I. will never be moral. The issues with training A.I. systems to act ethically include:

Stephen Hawking, Bill Gates, and Elon Musk have all stated that superintelligence (which is more superficial than super in its current form) should be handled delicately.

Can A.I. even exist in an ethical state? Opinions differ, but the facts are clear. The time for A.I. ethical regulations is near, and remaining inactive will be our greatest folly...

Can’t get enough of artificial intelligence? Check out our eBook on the state of A.I. in market research.

By Gary Ellis
A national campaign director shares some lessons learned on how to uncover insights about your audience while also ...
END_OF_DOCUMENT_TOKEN_TO_BE_REPLACED

Mapping Out the Nonconscious to Understand Conscious Consumer Decisions

By Andrew Konya
Reimagining technology’s role in market research. Beyond Freud The question of what drives human emotion fixates ...
END_OF_DOCUMENT_TOKEN_TO_BE_REPLACED